So I'm sure everyone knows that I have already made an onigiri plushie....but that one was sewn. And since I've been doing a bunch of crocheting lately, it only made sense to try out one that was crocheted!! I had a few people say they'd like to see one, but I had NO IDEA how to make a triangle (okay, I had an idea but didn't know if it would work), so I searched on youtube and found a really awesome person who had a triangle tutorial. That meant all that was left was to actually make the thing! And make it, I did. It was as easy as making two triangles and a big strip to go between them. I really wanted to do it as one piece instead of multiple pieces (except for the seaweed part, of course), but I don't know how to go about doing that either, so three pieces was good enough for me! I made them and stitched them together then stitched on the seaweed wrap and it was all set! I didn't put eyes on it though. I kinda forgot and I wasn't sure if I was liking how it was turning out. But it turns out I do like it! So here it is: 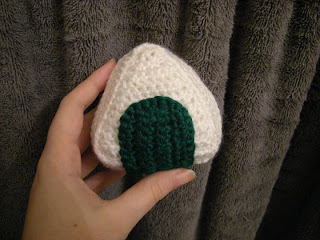 Whatcha think? Good? Bad? Would be TONS cuter if it actually had the eyes on it? Let me know what you think!!

In other news though, my car died on the way to work this morning. I'd just hopped on the highway and was doing about 65 when the transmission gave out. It dropped all the way down to first gear and that was that. I managed to get off the highway safely (there was an exit REALLY close), and I was able to drive it across town so I could borrow my mom's truck. The thing will still drive, but since it won't shift anymore, you have to drive 25 mph all the time. That's REALLY slow. Trust me. So I'm pretty sure my car's getting replaced as soon as I manage to get my taxes back, which I'll be filing tonight because I finally have all of my paperwork for it. I'm also skipping class because it's an extra 15 minutes away from work (so half an hour back home) and my mom's truck is getting pretty bad mileage right now cuz of winter and all. So I have the truck until further notice and my mom and I will be figuring stuff out later as to how to get me to work and whatnot on the days she has a doctor's appointment or something. So yeah...my car has really bad timing. It just couldn't wait till I actually had the money to replace it, could it?
Posted by Dexeka at 11:47 AM