Okay, so I know it's been a while since I've updated on here. I haven't known what I should post lately, but now I have a few fun things to update about. I even have a preview that won't be anywhere else!

To start off with, I finished my friend's clip-in ponytail! She is going to Youmacon next weekend and will be cosplaying K-san from Gravitation. She has naturally blonde hair, but it isn't quite long enough for the character, so I made her the clip-on ponytail and it's a really nice match to her natural hair. ^-^ 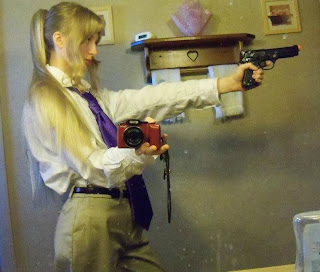 That's a pic she took of herself wearing it with her costume once she got home. You would never know it wasn't real! And she said her dad didn't realize it wasn't her hair either. lol

So now to the next project...I was reading a blog last week and the girl who writes it had a tutorial up for making your own lipgloss. Of course, I had to try it. So I went out and bought the things I needed for it (stuff you'd normally already have in your house, but for whatever reason we didn't) and went to it. Here's what I came up with: 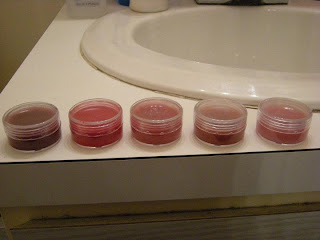 I tested the red one (the second one) and my friend tested one of the pinks (the middle one). The red one definitely had some color to it, though just a bit darker than my lips, which is what I really wanted. The one my friend tried seemed to just be glossy. I haven't tested the other ones, so I dunno whether or not they have a noticeable tint to them. But I'm curious if anyone would be interested in buying some if I sold them? I'd prolly sell them for $2 a piece or something. They smell really nice too...and I'm thinking about adding flavors. I like them though. ^-^

Finally I have a little preview that is ONLY going to be on here. While I've been bored at work, I've been working on a package design. It's not very fancy, but I think it will be nice for selling the charms and stuff. So without further ado.... 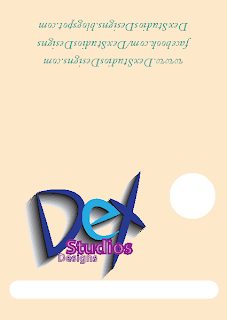 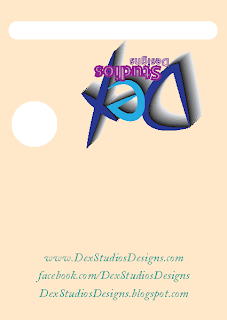 You know how you go to the craft store and there are a lot of things that are in little plastic bags and there's just some cardboard-like stuff stapled to the top with all of the item information? Well it's like that. It will be folded in half, so you can see the front on the left and the back on the right. The white space at the bottom is where the item name will go and the circle is where the price will go. I feel like a genius...haha So what do you guys think? I haven't had any printed yet since I don't need them till February, but I was thinking about getting them printed soon so I can get things ready early.