Well I was having so much fun with cupcake making that I had to make a donut as well, since the kit came with the stuff for that too. I was able to get the base for it done pretty quickly and I've gotten a bit better at working with the super small hook. The pattern has you make a base donut (like, the whole thing...just like a real one) then you make the icing top and stitch it together. The one that it came with the materials for was a chocolate donut with white icing and pink sprinkles. Once I was done with it, I loved how it turned out so much that I had to make another one!! I didn't have enough material for a second one though, so I decided to adjust the pattern a little bit and I made a smaller one. It's soooo cute! I love how it turned out. Side-by-side they're even more adorable because it's like a mama and a baby donut! I really enjoyed making them though, where I got a bit annoyed by the cupcake because of the base. But it was probably more annoying because I'm not used to working with such a small crochet hook either. Oh well, such is life, right? lol 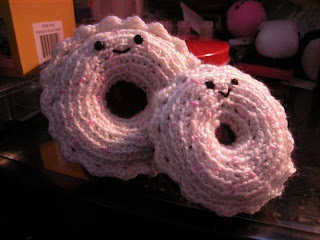 I guess that's really about all I have to share for now. Try not to freeze in the cold!
Posted by Dexeka at 9:14 AM