It Came with Eggs

Well after finishing the cupcake and donuts I still had a little bit of yarn left, but not enough to make any more cupcakes or donuts, so I decided to skim through the book that came with the kit and see what else I might be able to make with the little bit of yarn I had left. So I made an egg! There was a pattern for a cracked egg, but I lack yellow yarn, so I had to opt for the hard-boiled egg. Except for the top being a little bit pointier than I'd like (yay for having to close a circle!), I think it came out pretty well. I don't know if you'd be able to tell that it's supposed to be an egg without a bunch of other food plushies though. But I think the cracked egg would be more obvious. 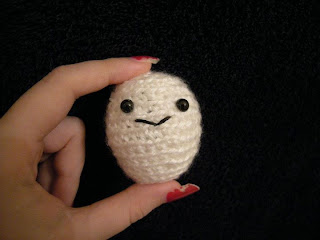 So tada! That's what it looks like! It's pretty simple...I started working on another cupcake too cuz I went out and got some light brown yarn the other night. My next project will be the tea and cookies that are in the book (and prolly a light brown donut of some kind), so that'll be fun. I needed the light brown for the tea color...but if you ask me, it looks more like cappucino! But that works. It'll be cute either way.