Happy Monday everyone!! I know, it's a horrible thing to say, but if you start the week out on a good note, it's bound to end on a good note as well, right?

Well I have a lot of little updates today because I did so much over the weekend. Like I said on Friday morning, I got to hang out with one of my friends over the weekend. We actually ended up hanging out on both Friday and Saturday and hung out with some other friends Saturday night and played some Uno. It was fun because I haven't played Uno in forever.

So first, my friend and I made our cyberlox. She made a pair of black and yellow that she plans to add some extra stuff to and wear to the Youmacon Rave. Mine are pink, blue, and white. They both also have double the plastic lacing on them for extra decoration. 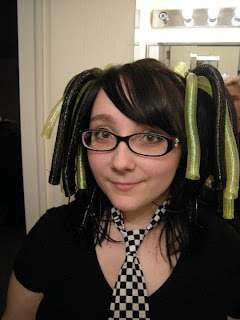 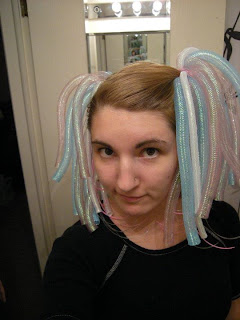 You can check them out on my facebook page too: Black and Yellow and Pink, Blue, and White
My friend's cyberlox are at "single" thickness and mine are "1.5" thickness, and roughly 1 foot long. Here is the pricing for them:
Normal: $30 (like the black & yellow)
Extra (x1.5) thick: $40 (like the pink, white, & blue)
Super Extra (x2) thick: $50
That night we went out to dinner wearing them and people kept asking us about them, so I was able to hand out a TON of business cards. There was a lady that was sitting at the table next to us that asked us about them because they looked like the hair on the "la la loopsy" dolls. I'd never heard of them, so I checked it out and it kinda does. So I figured I could make some "kid size" pairs of cyberlox that would work for halloween. They would be roughly 8 inches long and be $20 or $30. The $20 ones would be "single" thickness and the $30 ones would be "double" thickness. That was just an idea tho.
I also worked on a cute, giant lolita bow while we were hanging out. They're pretty simple to make, but involve a little bit of sewing. I only made one, but I have the fabric all set to make a second one. 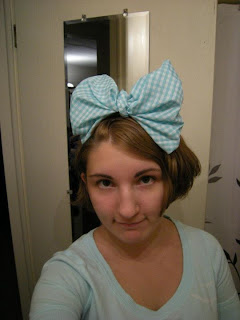 You can check it out on my facebook page too: Giant Lolita Bow

I figured I would sell them for $5 each, and I currently have fabric to also make them in blue, pink, purple, and a pink flower print. I think the coloring is a bit off in this pic, but it's actually a bit of a mint color.

And because I mentioned it in my last post, the wigs that I got came in and I got to try them on and takes pics over the weekend!! So I thought I would share some pics of them with you. 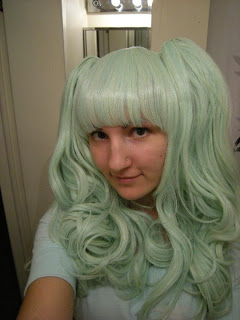 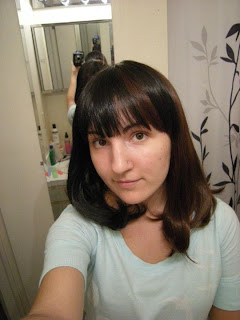 So those are the two wigs I got from Gothic Lolita Wigs. The one on the left is their Wavy Creamy Mint (and the two ponytails are detachable), and the one on the right is their Choco-Black Bob, which I got for free because they were doing an awesome promo where you could get a free bob if you spent $39.95 or more. I want to do some photoshoots with these too, and I REALLY love the mint wig. There's also a lolita contest going on hosted by one of their muses (and you can find details on their facebook page) and I really want to enter. I just don't have anything lolita... ^_^;;;
Aside from that, I still need to get the needle-felting commission all set and I'm gonna make some more bows soon. I'm having so much fun with all my art stuff right now. ^-^ Oh, and my friend that did the cyberlox with me said she thinks it would be awesome to "join my company", since she does a lot of crafty stuff too. I'll update again once we get some of that figured out.
Well, I guess that's about all I have to say for now. Hope everyone has a good week!
Posted by Dexeka at 11:44 AM No comments:

Hello everyone! I feel kinda crazy because I already have an update to make, but here goes....

I've been pretty bored at work so far this morning. I'm building files, but it's nothing more than a couple clicks then sit and wait till the machine's done with what it's doing. So with having so much wait time, I decided to remake my maneki neko design!! I think this one is a lot cuter than the original and will do well as a t-shirt. I'd like to get some opinions on it though, so let me know what you think. 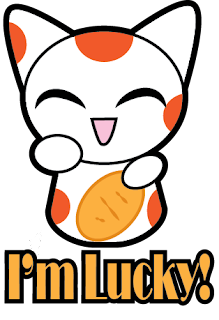 He is on my facebook page here too: Maneki Neko!!
Aside from that, I'll be putting together some more cyberlox with a friend this afternoon and I'll be working on the needle-felting commission I have. I may even end up making something more while I'm sitting here bored at work too. Guess we'll see on that one. I just wish I had my tablet here to play with instead of only using illustrator. Ah, well. I can use it at home, I just don't like using it with gimp. I want my photoshop back at home!! The only version I have that I could install I believe is too old to work with a tablet. Maybe not though. But it may be too old for Windows 7... ^_^;;;
I will probably have another update later tonight or tomorrow with some of the cyberlox stuff. And my friend will be helping me model them too, so you won't be having to stare at just me for all the pics. I'll also be picking up a couple packages from my mom this afternoon (one is stuff I ordered for a friend, one is mine), so I may update with some info about that. It's the new wigs I ordered from Gothic Lolita Wigs. Oh, and everyone should buy some stuff from me so I can keep paying for my new wig hobby...haha.
Once I get them home I'll have four wigs from them, and if you have five, you can get your own muse album to showcase how you wear their wigs. I have almost all of their wigs on my wishlist, so it'll take me a long time to get them all. Oh, and one of the ones I'll be picking up this afternoon was a freebie too, cuz they're really nice like that.
I'll also be ordering some stuff from BodyLine once I have some money. I've got a set of stuff to order, but it'll be $137 to get it, so it'll take some saving up. Of course, $42 of that is just shipping, but that's what happens when you order stuff from Japan.
Alright, I'm sure everyone's getting bored with my senseless babbling now, so I'll leave this here for now.
Happy Friday!!
Posted by Dexeka at 11:17 AM No comments:

So I decided I would make a blog for myself related to me and all of my "business" stuff. I make tons of different crafty things all the time and I sell them too. I'm going to be at a few anime conventions during the next year where I will be selling the things I've made. I make things in such a wide array of mediums that I don't really know where to start.

Well, okay, I guess the best place to start would be with the things I have been doing more recently. I have been getting into a lot of hair-type stuff, such as cyberlox falls, hair extensions, clip-on bangs, and wigs. I haven't tried my hand at making any wigs yet, but I have bought a few that I really love and I'm sure I'll get to making some eventually.

I actually made a pair of cyberlox falls for a friend of mine last night and I think they came out really nice. They are pure silver and roughly 1 foot long. I tried them on for pictures and she is really excited about them. I can't wait till she gets to see them in person and try them on herself. ^-^ I'm going to be making more soon too, and another friend of mine will be coming over to join me and make a pair of her own. 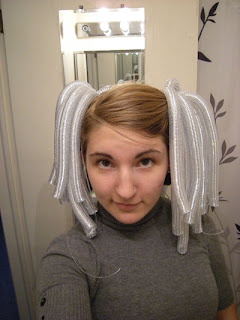 Here's the link for it on my facebook page too, if you'd like some more info: Cyberlox!

Aside from that I have a few commissions that I am working on for different people. Another friend of mine has requested a clip-on ponytail for a cosplay she wants to do. I just got the hair for it in yesterday with all of the cyberlox stuff and I have it matched to her natural hair color, so she doesn't need a wig or anything...just a little extra hair. lol I also have a request for a needle-felted owl and zebra from a friend's friend. I'll be getting to work on those and hopefully have them done sometime next week. Finally, I'm making a needle-felted unicorn for my mom because I can. I'm going to give it to her for x-mas. I've got a few other things to make as prizes for contests run on deviantArt too.

Well I guess that's all I really have to say for the moment. I will update more as I have more to talk about. Have a great weekend everybody!!
Posted by Dexeka at 10:54 AM No comments: