So I got some new yarn because I found out I only own two REALLY SMALL balls of brown yarn. Since there are a lot of patterns that call for a really light brown, I opted for that so I could make a few new things. I started with a cupcake, but so far I only have the bottom part of it done, so I can't post anything on that yet. I did, however, work on the pattern for a cup of tea and cookies! The tea cup uses the really light brown (I think it looks more like cappucino than tea, but that's just me), so I thought it would be a great thing to work on! The top was really easy and I was able to get it done while I was waiting for my boyfriend's parents to show up to have dinner with us. The rest took a little bit longer because I had to deal with the fact that the new semester started...which means the beginning of classes and getting back into the swing of things with a new class load. I guess the good thing is that I'm only taking three classes this semester (cuz they won't let me take the others that I need...grr), so I'll be able to focus on other crafty things a bit more. So, without further ado, the teacup! 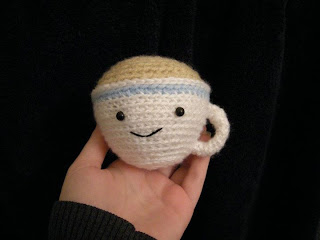 Unfortunately I don't have the cookies done yet, so that'll have to wait for another day.

In other news, I'm busy getting ready for Almacon and Shutocon that are both happening in the next couple of months. I still need to buy the racks I want off Amazon, but I need to get a good paycheck in first. I got way to many holidays on my last paycheck (and I'm not full time, so they're not paid), so I don't really have the extra money for them at the moment. I'll get them soon enough though.
Posted by Dexeka at 12:38 PM