After Another Long Break...

Okay, so I still don't update very often, but I do have a few things to talk about just because. Most of them aren't business-related though.

First, I went to Youmacon in Detroit with some friends a few weeks ago. It was a last-minute thing because their fourth roommate bailed on them, even though he said he would give them money for stuff whether or not he ended up going. So they asked me to come and I went. I had a lot of fun, though I think I would've really loved it if I'd gotten a table in Artist Alley.

I got there around 7:30 Friday night and we didn't do a whole lot after that. We wandered just a little bit, but I wasn't feeling the best, so my friend and I decided to head to bed around 10 while the boys wandered off and had their own fun for the night. Saturday I dressed up as Mokona from Magic Knight Rayearth/xxxHolic/Tsubasa Chronicles and people seemed to like it, though not many recognized the character. There were only a few people that I could actually take pics with, so when I found them I did. 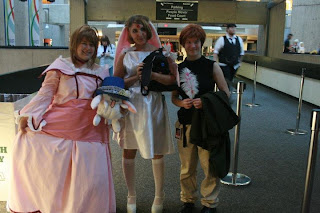 This is the only full body pic I have of the costume, and the girl on the left is Sakura from Tsubasa Chronicles. I'm not sure about the one on the right though. After wandering around in heels all day, my feet were pretty sore, so we headed up to the hotel room to relax for a bit before getting ready for the Rave. We went around selling glowsticks to people and it was a lot of fun. Here's what I wore for the rave: 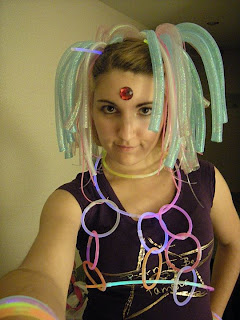 It was a lot of fun, even though I'm not much for dancing. On Sunday we packed everything up to head home and went down to the dealer's room for some last-minute purchases. I brought $30 worth of snacks home to share with my boyfriend. lol The snacks are way over-priced, but it's hard to resist when you can't find them anywhere but cons.

Since I'm going to be in the Artist Alley at Shutocon and they are doing a couple contests, I decided to put something together for their t-shirt contest. I think it turned out pretty cool. 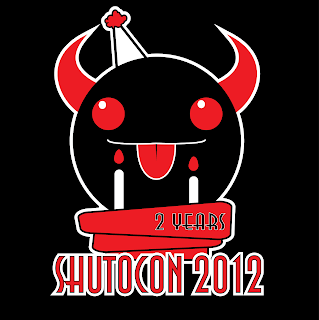 It's only their second year and one of the requirements was to have their mascot, so I did a second birthday theme. Cute, huh? If I win I'll get my table for free, so that would be really cool. They said there hasn't been a lot of entries, so I'm really hoping to win. That would mean I'd only be paying for gas!

On Monday last week I also got my Konad Nail Art Kit in the mail. It showed up on Saturday, but I didn't have the chance to pick it up till Monday. And I didn't get to test it out until just a couple days ago. I painted my nails pink on Friday and tested out the konad Saturday night. It turned out pretty good...till I put the topcoat on. Then it smeared a bit, but most of my nails aren't too bad. Guess that's what I get for buying a cheap topcoat though...haha I looked up some tips to keep it from smearing though, so I'll be testing it again soon.

In some other news, it's getting pretty close to the end of the semester. I have a midterm due this week for my online class and the rest of my classes are just.....well, boring. Once the semester is over I should have a bit of time to work on art stuff before the winter semester begins, so you can be looking forward to *hopefully* more posts in mid-December.

Until then, happy crafting and happy Thanksgiving if I don't post again before!
Posted by Dexeka at 11:43 AM No comments: